Note: Substitute words for Form are Idea, Finite and Thing.

Note: Substitute words for Belief are Trust and Faith.

Furthermore, can we all agree that Knowledge exists? Well yes… Thus given this very existence of Knowledge hitherto, this pointedly means no more or less than the triumph of Form belief over not-Form belief, Object belief over Subject belief, Finite over the Infinite. Whatsmore, one can safely state that the Form/not-Form delineation boundary, the circumference/brim/bound to which defines Form from not-Form, the ‘skin of Form’ if you will is what scholars over the ages refer to as Ego (or see Ahaṃkāra). Rephrased, that to which instantiates Form from not Form, delineated Order from Chaos is called Ego (‘the skin of Form) and it’s animate is Belief. The emergence/construel agency of Ego (‘the skin of Form) is Belief/Trust/Faith. Finally, Ego has a workable definition!

From the above, if Form/Idea/Thing/Order and not-Form are agented by the divine modality of Belief, then can one state the same for Knowledge? If Knowledge particle is Ideas and Ideas are Form then Knowledge is and is denominated in Form and thus – synonymously – agented by the mind modality of Belief. Therefore, Knowledge is of Belief and no-more-or-less than an attestation/evidence/validation of the presence of Form veneration; pointedly, an anointment of the Finite! Finite-ism…

“the Egyptians communicated in images…communication via words is ‘infinite rape’… “ – somanywhys.

Note: diction in the word dictionary is an – expression of ideas via words. That is, an ex-(out of or emergence)-press(take into authority via force)-ion…in other words, to dict- is to ‘autocratically’ forge the infinite into the finite.

Knowledge can thus only exist via Belief/Trust/Faith in Form, fashioned with/by Ego. Conversely, if one were to Believe in the antithesis (not-Form), recognise and dissolve the Ego skin of Form, is not one closer to truth? One does this by using the divine knowing/thoughts/cognisance/’thinking’.

In light of this, one can safely posit that Knowledge can only and only exist via dead knowing..and vice versa (of coarse). If Knowledge is an ab-solute*, colloquially/egotistically/conceitedly termed ‘a fact’, then knowing is the solution (solute-ion) or ‘towards’ solute or the dissolute of Knowledge. Via knowing, one will pilgrimage to the superlative Knowledge (Outermost Knowledge) or origins of said Knowledge and meet its maker; that is meet its Ego skin or original axiom (Super Axiom) respectively. Via knowing, one will dissolve Knowledge, will cleans truth of ‘Belief/Trust/Faith’ spirited Knowledge…

*Note: the ab prefix in absolute is latin for ‘away from’, thus absolute means away from solute. 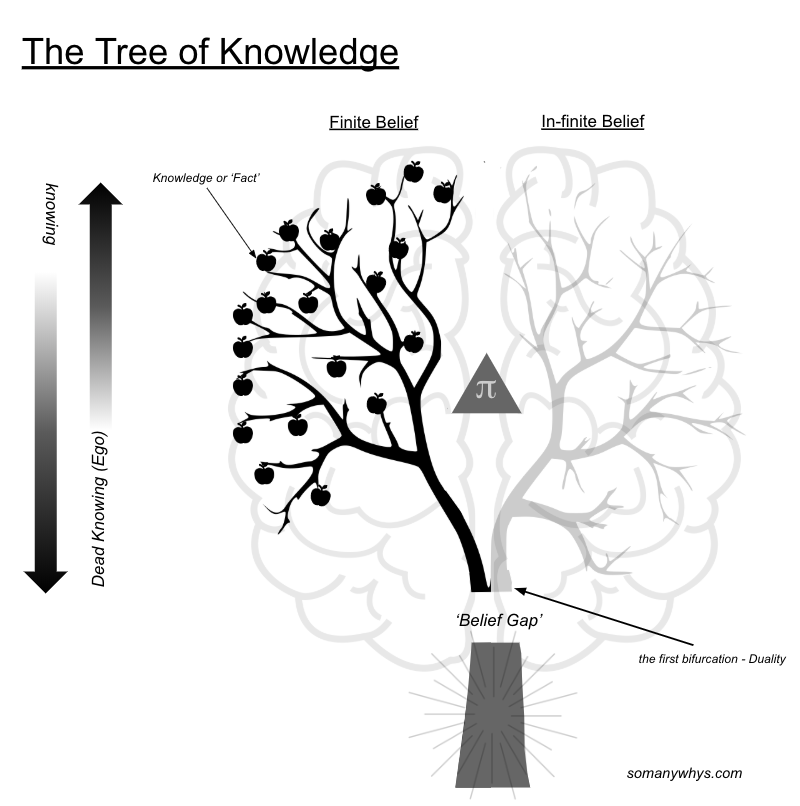 An ontological understanding of numbers is to understand its axioms 1 & 0 and proceed in virtue to ‘unveil’ its preceeds. 1 & 0 are the embodiments of Form and not Form, Finite and Infinite and thus that to which preceeds 1 & 0 is Belief. One asks oneself, what ability is there in using 1’s & 0’s produce or mitosi’ (…the produce of 1 & 0 mitosis, plurals, that is numbers), and its manipulates (that is Calculus/Arithmetic/Algebra and so on…) to advance in this understanding? For example, the number 24430345 is simply many 1’s & 0’s and Calculus is simply a decreed manipulate framework in the lexicon of Mathematical Doctrine/Law. Indeed, permeating combinations of 1’s & 0’s with Frameworks does not advance one beyond the understanding point horizon of 1’s & 0’s but undeniably, quite the opposite (verily it builds Overstanding, and the act is synonymous to what ‘the wriggle’ is in the proverbial ‘surviving quicksand’ fable). If understanding the axiomatic preceeds of 1 & 0 is one’s destiny then the act of using 1 & 0 produce (numbers) and frameworks (manipulates) should be viewed as useless toil, as futile/counterproductive, as penal!…what the wriggle act is to the proverbial quicksand…

Note: the phrase “to ‘change my mind’ is to change ones current Knowledge via knowing.

Note: Denominations is de(of)-nomin (latin root word for name), and -ation is the adjective. Thus, to denominate is to name (particles) from what is already named (the whole).

To nominate and consequently denominate is human ego forging the infinite into the finite; dict-tating the infinite via WORD (all caps implying absolute egoistic conviction) . Denominationalism/secularism/factionalism/fundamentalism/literalism is human ego forging god/omniscience into egoistical absolute hard definition of fact, ceasing all knowing with a conceited decree of known/knowledge/fact! Theological denomination/fundamentalism/literalism sadly proliferates the dendritic Tree of Knowledge, its fruits of bigotry and dogmatic creeds of fact.

The Tree of Knowledge, the antithesis to knowing, is agented by self-righteousness and incorporated by human ego. The Tree’s growth (towards a more absolute literal/fundamental Knowledge, a hard crusted egoistic Known) is a grand metric of human ego, dead knowing and Knowledge-ism. This, is the definition of self-righteousness and the Great Schism exemplification comes to mind…

Thought experiment: How do you explain to a fish that it is submersed in water? Similarly, how do you explain to a human that they are submersed in the Sensorium realm? For such subject, requisites for cognition are denominated in the very thing your are trying to get them to recognise and transcend? ‘Sensorialists’ (or any other ‘ists’…’) are so tantalised by their light that ‘their’ nuance must be ‘sensible’. They even decree that something is not real or reality if it is dissolved of sense, that is ab-sent…A case of ‘one is in a penitentiary of their own Knowledge, by dead knowing’…

…’think’ about it….Knowledge is dead knowing.

I am View all posts by Ryan de BENNETT